Description : Very Nice Handmade Navaratna Ring Made With Sterling Silver and Studded with Excellent Quality Of natural Gemstones Including one Natural Diamond. Ring Is Available in all Sizes. IT Will Bring You Full Astrological Affect If you are Told To Wear a Navaratna Ring.

1.The sloka about nine literary gems is a very late composition.

2.The Sanskrit verse mentioned nine people in the Royal court of Emperor Vikramaditya. The most famous Vikramaditya of Indian history lived in the first century BCE. We have one era known as Vikrama Samvat (56 BCE) in our calendar system. Because of his fame, for at least 1000 years, several other kings also called themselves Vikramaditya! But the nine literary gems lived in different ages. So they would not fit into his court!

3.Of the nine scholars, we did not know about four scholars except their names.

4.Kalidasa was the most famous scholar in the list. He could have lived in the first century BCE, renowned Sanskrit scholars believe so. (Please read my earlier articles on Kalidasa’s age through Sangam Tamil literature). 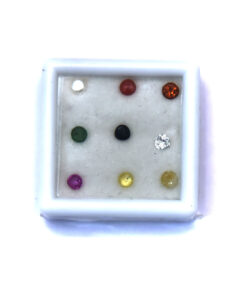