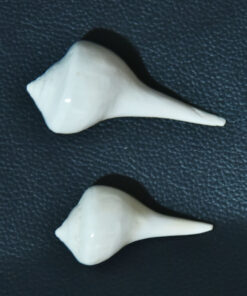 Description : Intimately associated with the salagramas are the sacred conch-shells known as samkhas, which are also geological and biological specimens of great antiquity.  Like the salagramas which are ammonite fossils, the samkhas are marine fossil remains of the large gastropods (stomach footed), especially ‘strombus gigas’.  They are shells of bivalve mollusc (conchifera division of the molluscs).  Molluscs are animals of the sea-shore, with soft bodies devoid of any bones but having hard shells.  The gastropods crawl along on a broad foot (viz., stomachs) carrying shells on their bodies; and into these shells they pull themselves when threatened.  Different molluscs have different plans in making their shells, like the moon-shells, cowry-shells, tooth-shells and ordinary bivalves (Lamelli-branchiata) like oysters.  Conchifera (the spiral prominent mussels (cavities), with conchi-spires on the outside.

Since 1776, a separate discipline known as Conchology has grown for the study of conch-shells.  In 1828, and instrument known as Conchometer was also designed to measure the spiral arrangements on the fossil–shell, the angles of the spire, and so on.

Since antiquity these marine shells have been credited with mystic ort occult powerk,k even in Greece and Rome.  The Greeks, for instance, are known to have held in great reverence conchites, which were stones resembling the fossil-shells (conches).  The conch-shells have also been employed since ancient times as a martial instrument.  The conch-shell is perforated at one end, and blown as a wind-instrument, as a horn or trumpet.  The use of these shells to announce the commencement of an encounter on the battlefield has been mentioned in the great epic Mahabharata.  In Bhagavad-gita, the loud roar of the conch-shells blown by the Pandava army is said to have unnerved the Kauravas (1:19).  The Romans and Tritons are also recorded to have used the trumpet like the Indian heroes.  They also had their own names given to their favourite conch-shells.

In India, a conch-shell horn is regarded as one of the classical pentad of musical instruments (pancha-vadya) of folk character : horn (srnga or kombu), kettle-drum (tammata), conch-shell trumpet (samkha or davala), large drum (bheri) and bronce gong (jayaghanta or jagata).  The conch-shell trumpet can be very melodic and is employed in processions and on auspicious occasions.  There are two ways of blowing it : (1) dhamana or blowing by holding the perforated end directly to the lips, and (2) purana or filling the air-current into the conch-shell through a small cavity in the shell (symophonic).

The conch-shells in ancient maritime civilizations have also been used as containers of articles like oil and salt; the conch-shells have provided material and form for ornaments like bracelets and armbands (samkha-valaya), ear-pieces (samkha-patra), and necklace-beads (samkha-mani).

The convolutions of the conch-shell (the spiral curves) have inspired a large number of designs and decorative motifs.  In Rome, an architectural style was modelled after the shell-convolution: domed roof with semi-circular apse.  The spiral forms in art and architecture have directly been taken from the conch-shell.

And in religious lore, especially in Buddhism, it is one of the eight auspicious signs (astha-mangala), the other seven being a parasol (chhatra), vase (kalasa), flower (pushpa), the sacred knot (granthi), wheel (charka), banner (Pataka), and a pair of fish (mina).  The conch-shell here symbolizes the dharma-teaching (dharma-smakha), even as the parasol stands for the divine protection, vase for immortality, flower for mercy, knot for eternity, wheel for truth, and banner for victory.

The form of the conch-shell is imitated in a particular hand-gesture (mudra) employed in classical dance as well as in ritualistic worship.  It is known as ‘samkha-mudra’, belonging to the ‘samyuta’ variety (where both the hands are used together).  The right thumb is placed in the middle of the left palm, and the left thimb is raised in the sikhara-manner (like the superstructure on the sanctum in a temple), while the other four fingers of the left hand engfold the right thumb.  The four fingers of the right hand are enclosed in the left fist, the tip of the right fore-finger touching the tip of the upraised left thumb.  The hand posture resembles the conch-shell convolution (samkhavarta).  In the religious context, it symbolizes the presence of a conch which is dear to Vishnu.

Samkha in Indian mythology is also the anme given to one of the nine treasures held by the god of wealth, Kubera.  It represents a bundred billion (or 100,000 koti or crore).  An attendant of Kubera is called Samkha-nidhi, and he is shown as a corpulent dwarf in an easy posure holding a conch-shell in one of his two hands.  His companion is Padma-nidhi, who resembles Samkha-nidhi in all particulars except that he holds a lotus in his hand instead of conch-shell.  Another attendant of Kubera bears the name Samkha-chuda (or Samkha-sirsha), which is also the name of a dragon (naga).

The conch-shell motif is employed for branding cows and buffaloes (samkha-mudrankana).  The branding seal is a small metallic plate carrying the cut-out design of a conch-shell (or of a discus, charka), with a handle.  It is a curative device that branding is done, when the animals are ill.  More often, the conch-shell is sued for pouring out libations of water (samkhodaka_ before an icon; or for giving a ceremonial bath to a monarch (samkha-snana).